In this article we are going to create a small user information application which will display the user’s picture, name, company name and the country flag. 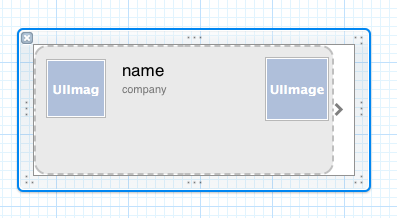 From the screenshot you can notice that there are two UILabel controls and two UIImageView control. Before hooking up the controls to the Interface Designer make sure that the class for the UITableViewCell is set as «PersonCell». Also, make sure that the identifier property of the UITableViewCell is set to something you can remember. For this article we have set it to «personCell». You can set the unique identifier to anything you want just be sure to remember it since we are going to use it later in the article. In the next section we are going to populate the UITableView with our custom cells.

In this section we are going to load our newly created custom cells into the UITableView. The UITableView is populated by a custom Person collection. The Person class is implemented below:

Next, we need to implement the cellForRowAtIndexPath method which will be responsible for returning the UITableViewCell to the UITableView. But before that make sure that AddressBookViewController class implements the UITableViewDataSource delegate as shown below:

UITableViewDataSource has many methods but you are required to implement the following methods:

The numberOfRowsInSection will simply return the total number of rows in a particular section. Since, in this application we only have a single section we can return the total count of persons collection as shown below:

The cellForRowAtIndexPath is implemented below:

The main difference in loading a custom UITableViewCell versus a regular UITableViewCell is that for custom cell use the NSBundle class. This allows us to load the Nib file called «PersonCell.xib». When iterating through the mainBundle collection we used the isKindOfClass method to filter the PersonCell class. In the end we assign the properties of the person instance to the properties of the cell and return the cell. One more thing to note is the uniqueIdentifier which is set to «personCell». This uniqueIdentifier should be the exact same as we set on our custom UITableViewCell through the user interface.

Run the application and you will see the following output:

The result is shown below in the screenshot: 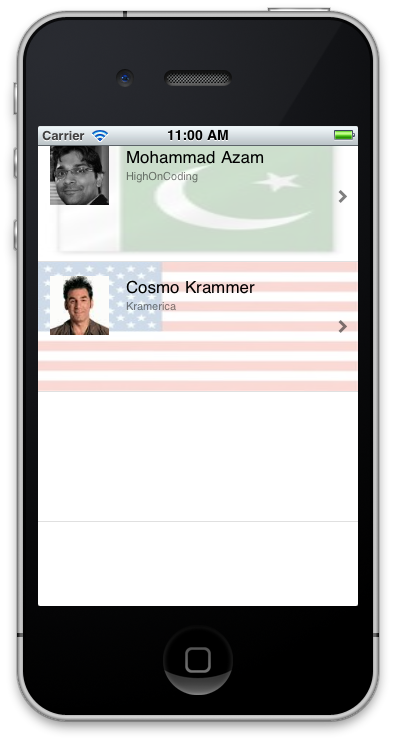 In this article we learned how to create a custom UITableViewCell. A custom cell gives more flexibility to the developer to flex the imagination muscle. In the next tutorial we will implement a PullToRefresh UITableView which will allow the user to refresh the contents of the UITableView by just pulling it down.